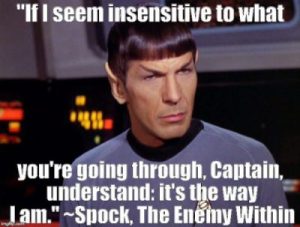 Image description: Photo of Spock on the bridge of the Enterprise with the quote, “If I seem insensitive to what you’re going through, Captain, understand: it’s the way I am.” ~Spock, Star Trek “The Enemy Within”

As I was reminded by a good friend the other day, disclaimers can be a powerful way to address misconceptions and difficulties in my life. I often will use disclaimers when I find myself in a situation affected by either my face-blindness or my sensory processing issues.

A simple: “As soon as I look away from people, I cannot remember or picture what their face looks like. So if I don’t recognize you next time you see me, let me know who you are and I’ll remember you.” often means the difference between inadvertently insulting someone, while feeling like a failure, or being supported socially by the other person so that we can successfully interact the next time they see me.

Letting people at my gym know that I need to avoid standing near or in front of the industrial fans has also been helpful. The other people at my gym usually want to stand in front of the fans, which means that my honesty in that situation is mutually beneficial in addition to likely preventing a sensory-overload-induced meltdown or shutdown on my part.

So, the other day as I was pondering to my friend about how I could live more authentically and less stressfully without accidentally hurting all the people I interact with, she reminded me about disclaimers.

Right! I had completely forgotten about disclaimers and the fact that they could be used for my communicative difficulties as well as for my face-blindness and sensory issues!

Given my success in using disclaimers in those other areas of my life, why have I not ever used disclaimers when speaking of my communicative difficulties? Specifically regarding the fact that body language, emotions, tone of voice, and subtext almost always either go unnoticed or are misinterpreted by me.

I’m not completely certain what the answer to that question is, but I’m now attempting to increase the number of disclaimers I use regarding that area of my life.

Quite coincidentally, immediately after having that discussion with my friend, my family happened to watch the Original Star Trek episode “The Enemy Within,” which provided me with an apt and timely example of what such a disclaimer could look and sound like.

Basically, in this episode, Captain Kirk splits into two different people in a transporter accident and is having a difficult time with the situation. Spock, very appropriately, inserts his own disclaimer into the emotional conversation: “If I seem insensitive to what you’re going through, Captain, understand: it’s the way I am.”

I believe Spock does that in order to assure Kirk that if he appears not to be sympathetic towards Kirk’s plight, it’s not purposeful or intended to be hurtful. It’s just the way Spock is.

I’m rather motivated not to hurt people, even unintentionally, and I’ve spent a great deal of time and effort over the years in attempting to act in socially appropriate/expected ways in order to minimize how much I hurt others. Naturally, I’ve also fallen short of the expected ideal most of those times, but I’ve tried my best, and often exhausted myself in the process.

Now that I’m looking into how I can live more authentically and less stressfully, I believe that using disclaimers more frequently will be particularly important and helpful. Disclaimers will also allow others to more effectively meet me partway because they’ll actually know that I’m struggling and not intentionally being insensitive.

This is a great post about how a disclaimer was used successfully in a work setting in order to avoid becoming completely overloaded. I wish I’d read it before finishing this post so that I could’ve worked in the link a bit more smoothly, but it’s an absolutely wonderful example and had to make it into this post somehow!

because I'm cranky and autistic

a creative life on the spectrum

Finally Knowing Me: An Autistic Life
Counting the Ways

How am I autistic? Let me count the ways

Days in the life of an adult on the spectrum

tired mom person trying to write a book in a house with a baby, toddler, teen, and a menagerie

Love and chaos deep in the Midwest

Ramblings in the darkness

Rebelling against a culture that values assimilation over individuality.

A Little Off the Mark

the day to day life of an autistic woman

The personal reflections and practical discoveries of a diagnosed autistic celiac

Neurodivergent Nicole
I CAN Be Autistic

Tales of wonder from the Autism Spectrum

In So Many Words
Everyday Autistic

Life through the eyes of an autistic

life through one female Asperger's lens

The Misadventures of Mama Pineapple

Neurodiversity is for Everyone ™

Blogging on autism and art.

one woman's thoughts about life on the spectrum

Simply my take on living life as a female with Asperger's Syndrome.